For the longest time, recording studios have given me the creeps.  They've always felt like plastic to me - little fabricated worlds with foam walls, black carpets and expensive microphones that you're scared to even breathe into.  I've gone into studios and witnessed the soul of a song get stolen right before my eyes.  I've peered over the shoulder of engineers and producers as they overwork things to death and with every turn of the dial get further and further away from the actual essence of the song.  It's a taste thing I guess, I just prefer things to feel real. I guess this all stems from my view of what a recording actual is.  I look at my recordings the same way that I do photographs, they are snapshots that capture time, simple as that. 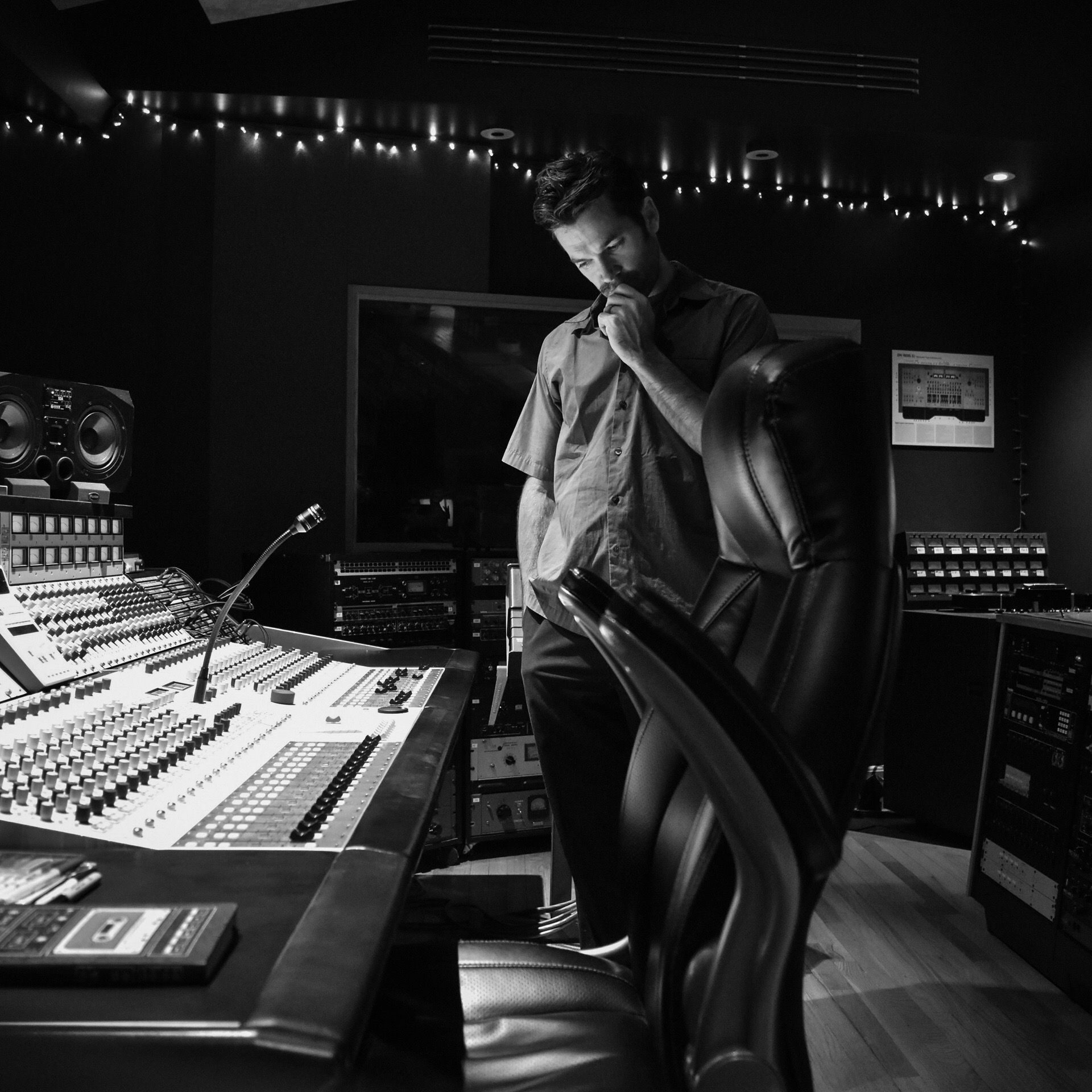 I'll never forget a moment from very early on in our recording days. John and I were tracking and in the middle of a song a motorcycle went by blasting hip-hop and was followed shortly after by a police siren.  We finished the song and looked at each other with huge smiles and said, "that was awesome! That's the take!".  The engineer thought otherwise and couldn't believe that we wanted to keep that.  Life isn't perfect, sometimes my voice is scratchy and flat if I've had too much coffee, sometimes my guitar makes weird buzzing sound if I don't fret it properly and sometimes a motorcycle drives by in the middle of a song. That's just the way that it is and I like to capture that - being authentic is the most important thing to me as an artist.

Enter Big Blue North.  A recording studio in an old church south west of Utica's city center. It's open, warm, inviting, elegant, and charming - the total opposite of what I had experienced in the past. I met the owners Pam and Jeff Aderman back in 2008 when Jeff came up to play keys for my old band The Villains. Although Jeff and I have different musical foundations and tastes we stand on common ground when it comes to the importance of feel, vibe and authenticity when it comes to making art. So a few years back, on a whim, I sent Jeff 30 or so songs that I'd written and just asked what he thought of them. A few weeks later we were in the studio making music together on what would become the Beverly Tapes VOL I. 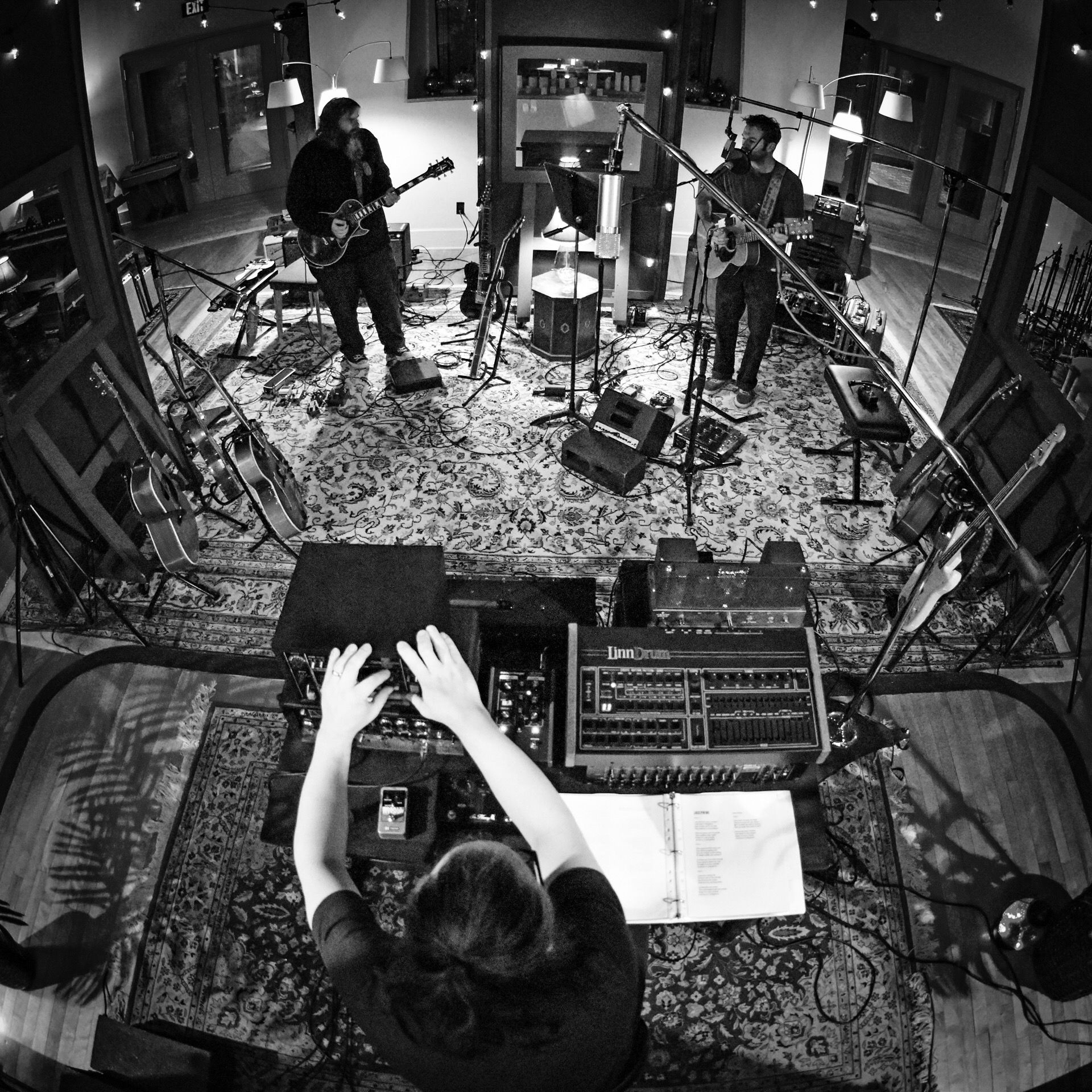 Here was the concept:

* I would play guitar and sing.

*Jeff would play keys and an array of vintage drum machines through an effects chain.

*And we would do it ALL live off the floor in real time onto 2" Tape. No computers. No head phones. No clicks. Just three guys playing music in a century old church with 35 foot wooden ceilings. 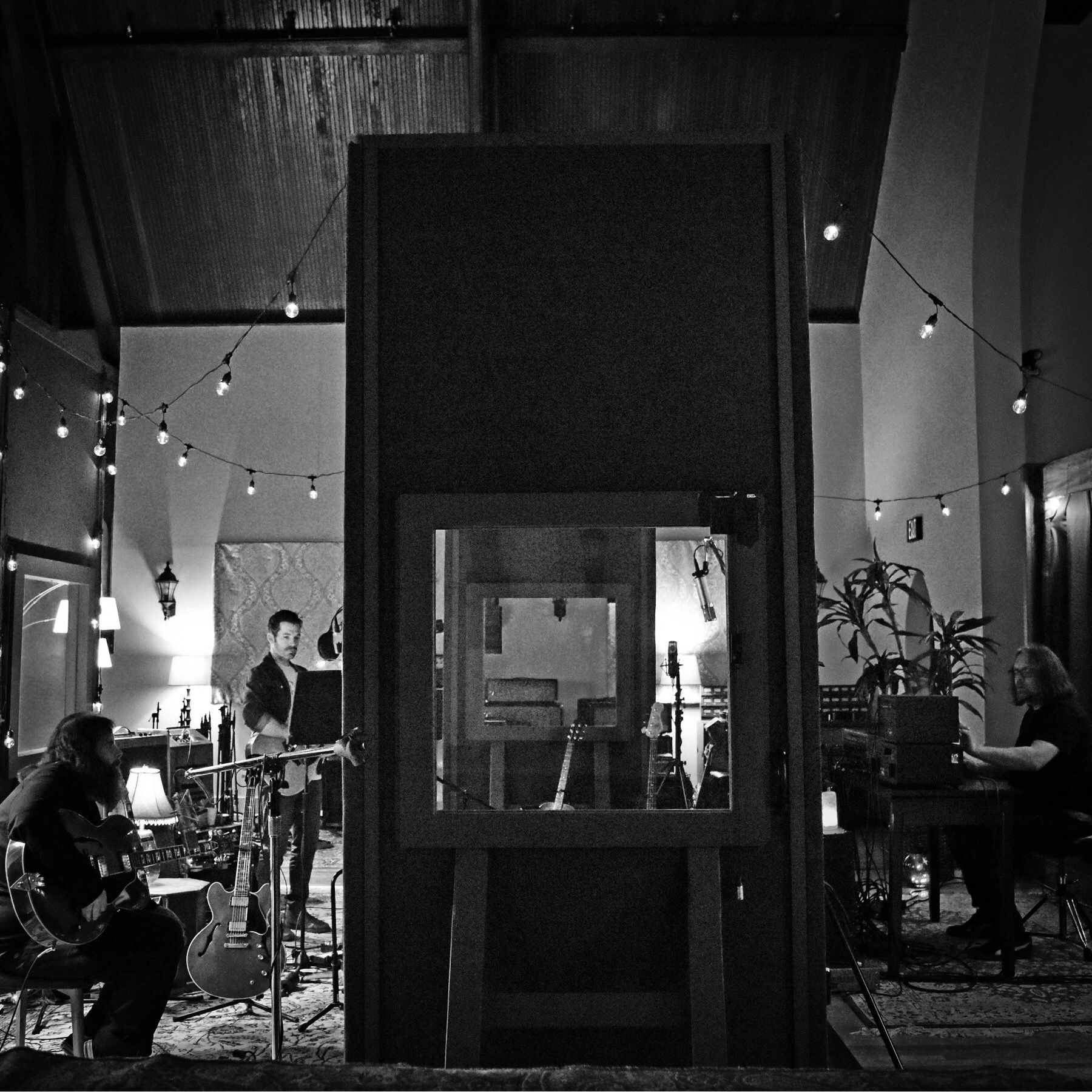 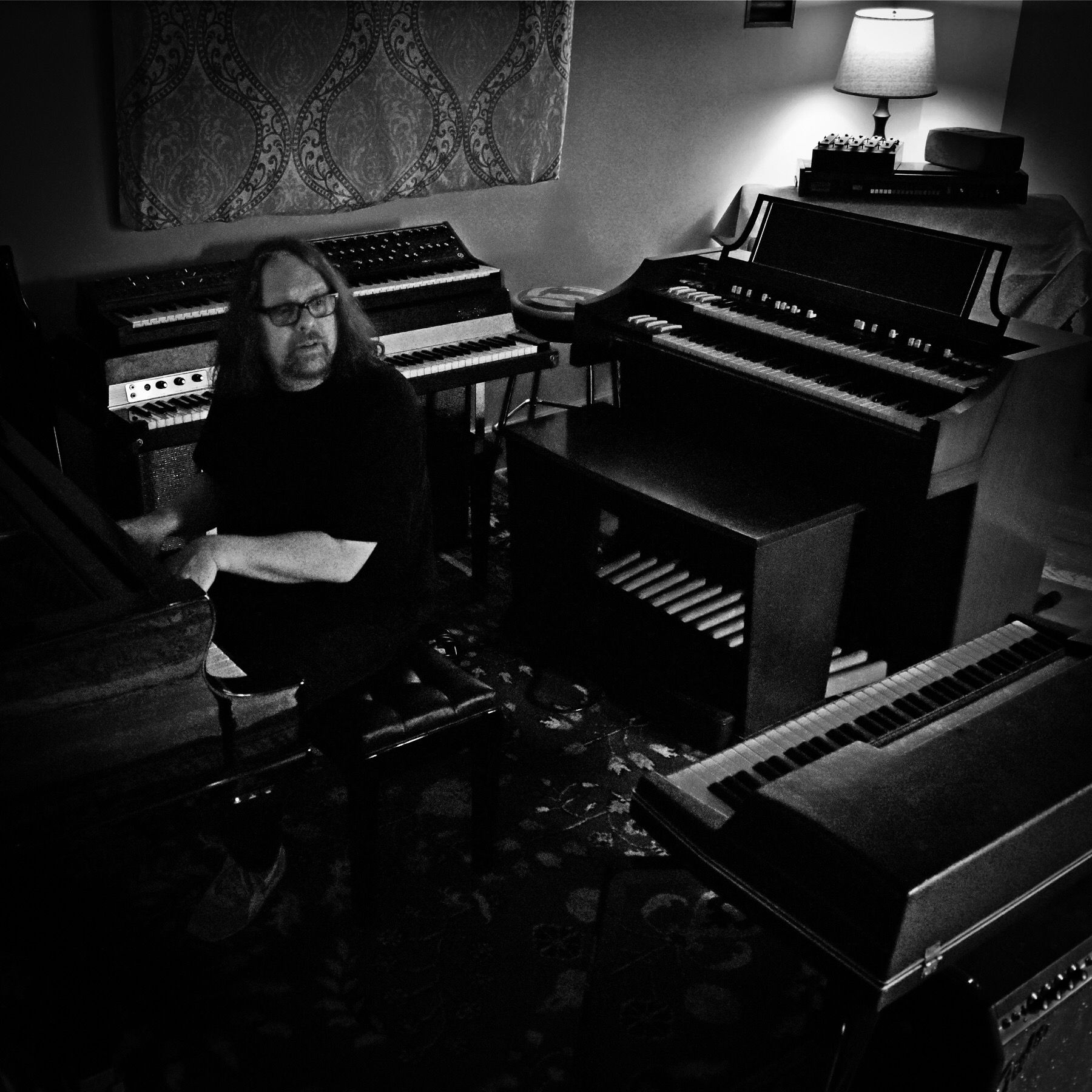 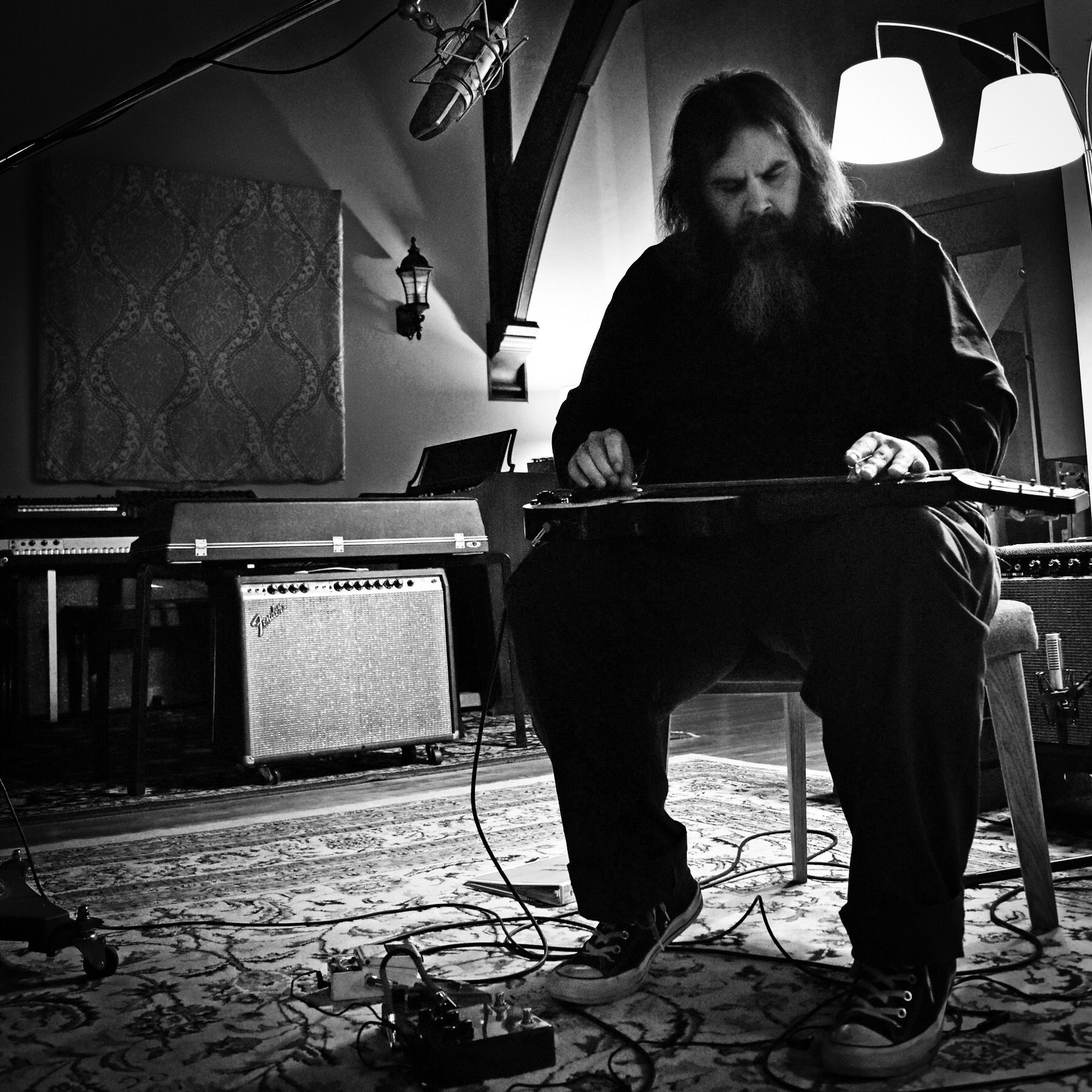 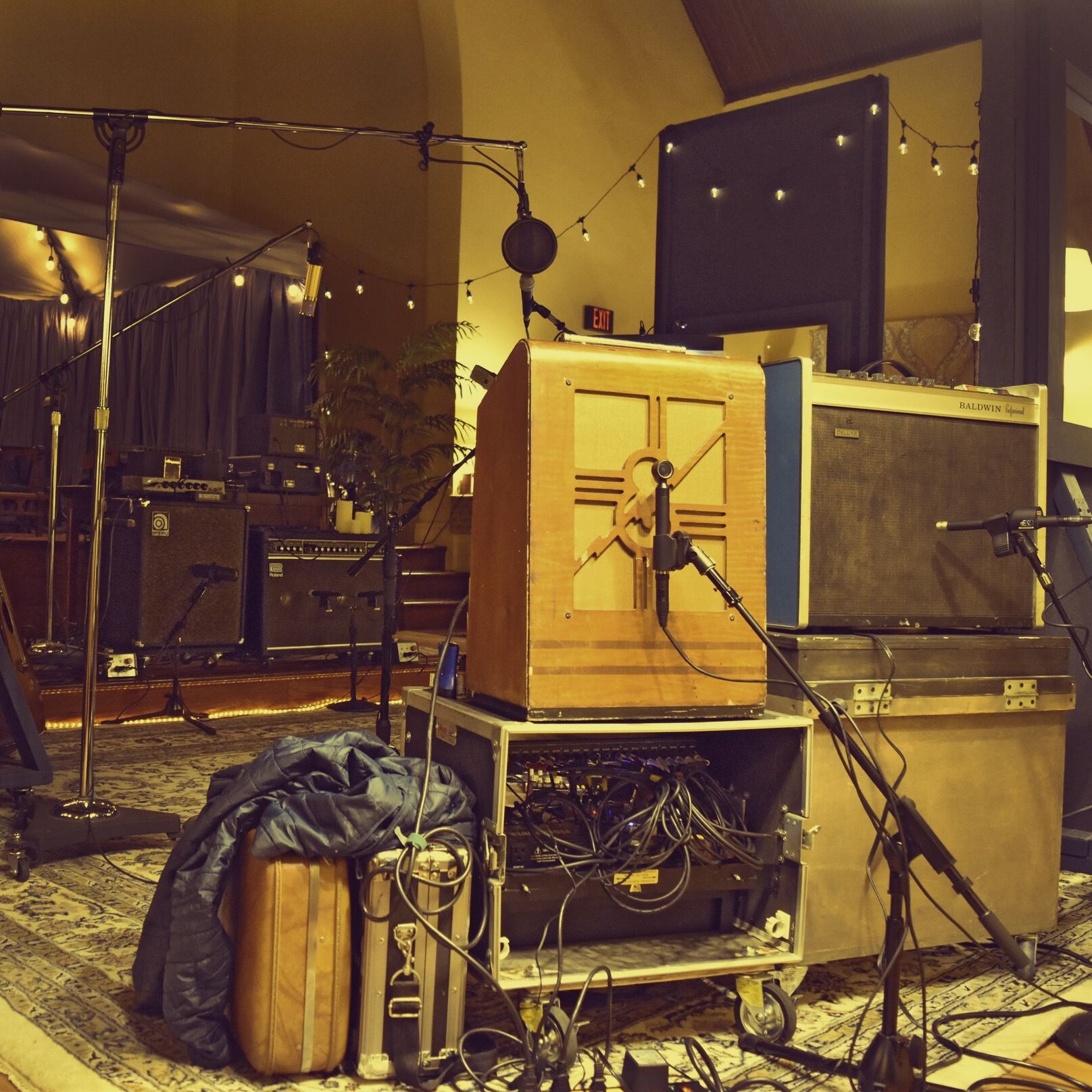 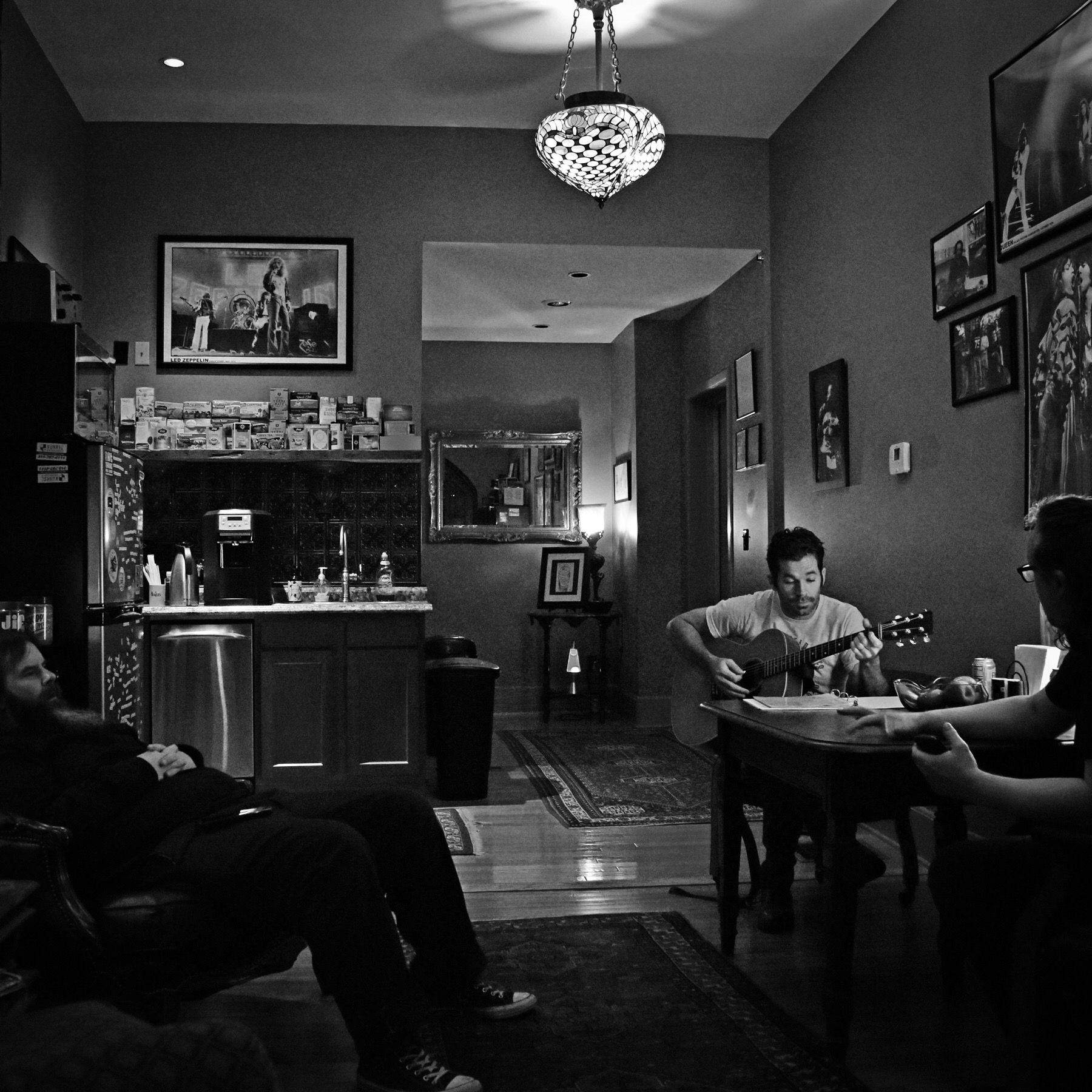 "Raspberry Hurricane" was the first song we worked on - it had an edge to it. Kinda gave me a Tom Watts/Leonard Cohen vibe.  The beat gave it this industrial emotion that made it feel cinematic to me, different from anything I had done up to that point - I was digging it. We realized that after working this first song that this was going to be a fun project, it sounded unique. We moved onto "Josephine" and again felt like we were walking into unchartered sonic territory in a way. Josephine was a new tune for me at the time, I think I had written it just a few weeks prior. We worked up a few other tunes that first day and eventually John left to go into run his bar while I stuck around the studio with Jeff. I had a few songs that were unfinished and were just ideas. Jeff said, "let's set up two mics in the foyer and have you sit on the stairway and just play them." I LOVED this idea, because it was raw and real. I went into the basement alone and finished a couple of the songs.  I came up into the foyer and noticed that Jeff was sitting behind an old pump organ. We laughed, worked up what you hear on "J Bird" and hit record on the tape machine. And just about the time I was ready to call it a night we decided that we should track "Little Lonesome Louie". The cell phone recording that I had sent him as a demo had a television on in the background. Jeff being the type of guy that he is decided that we should have a television playing during the actual recording as well - and so we did. He also brought out this little tiny toy piano and clunked along.  So fun. 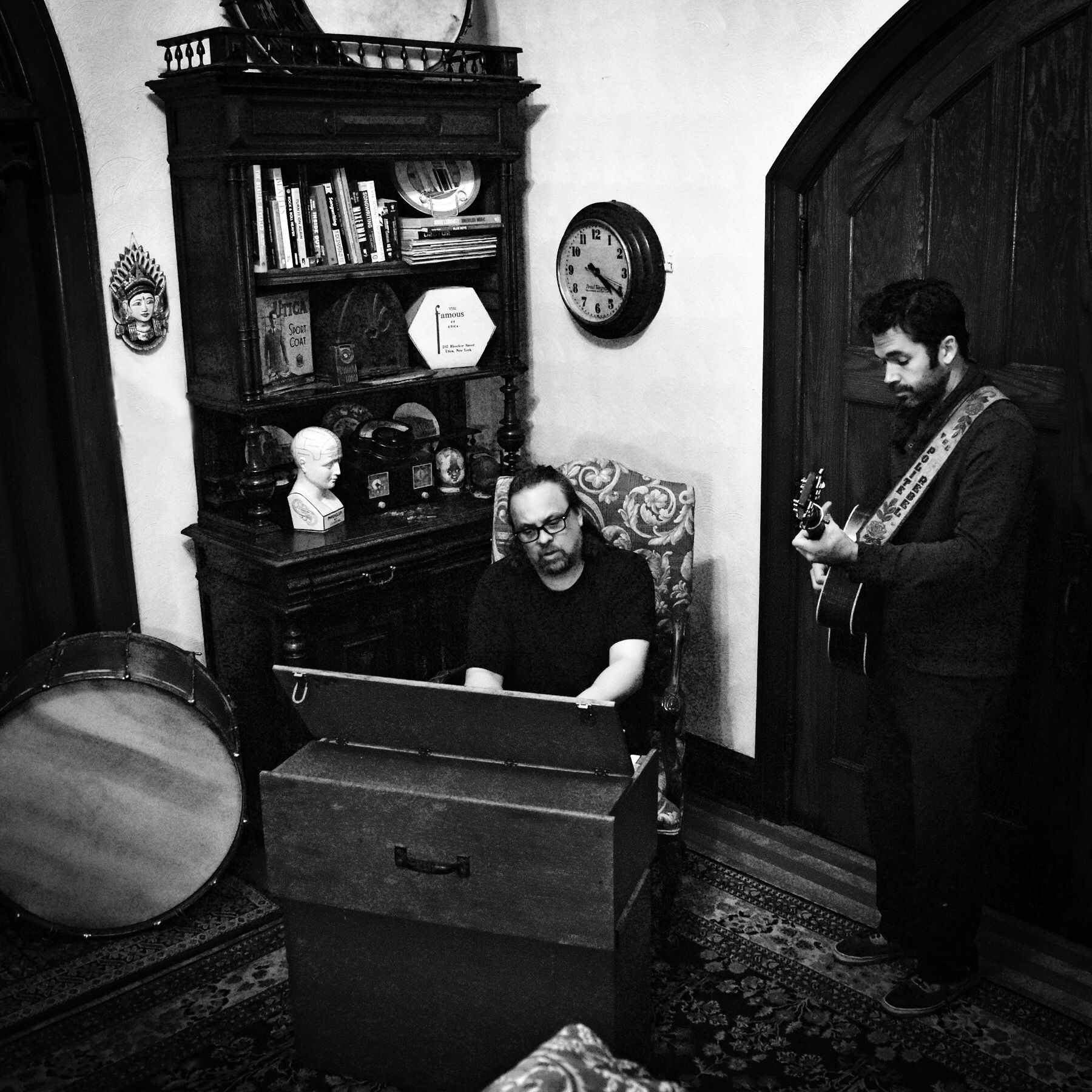 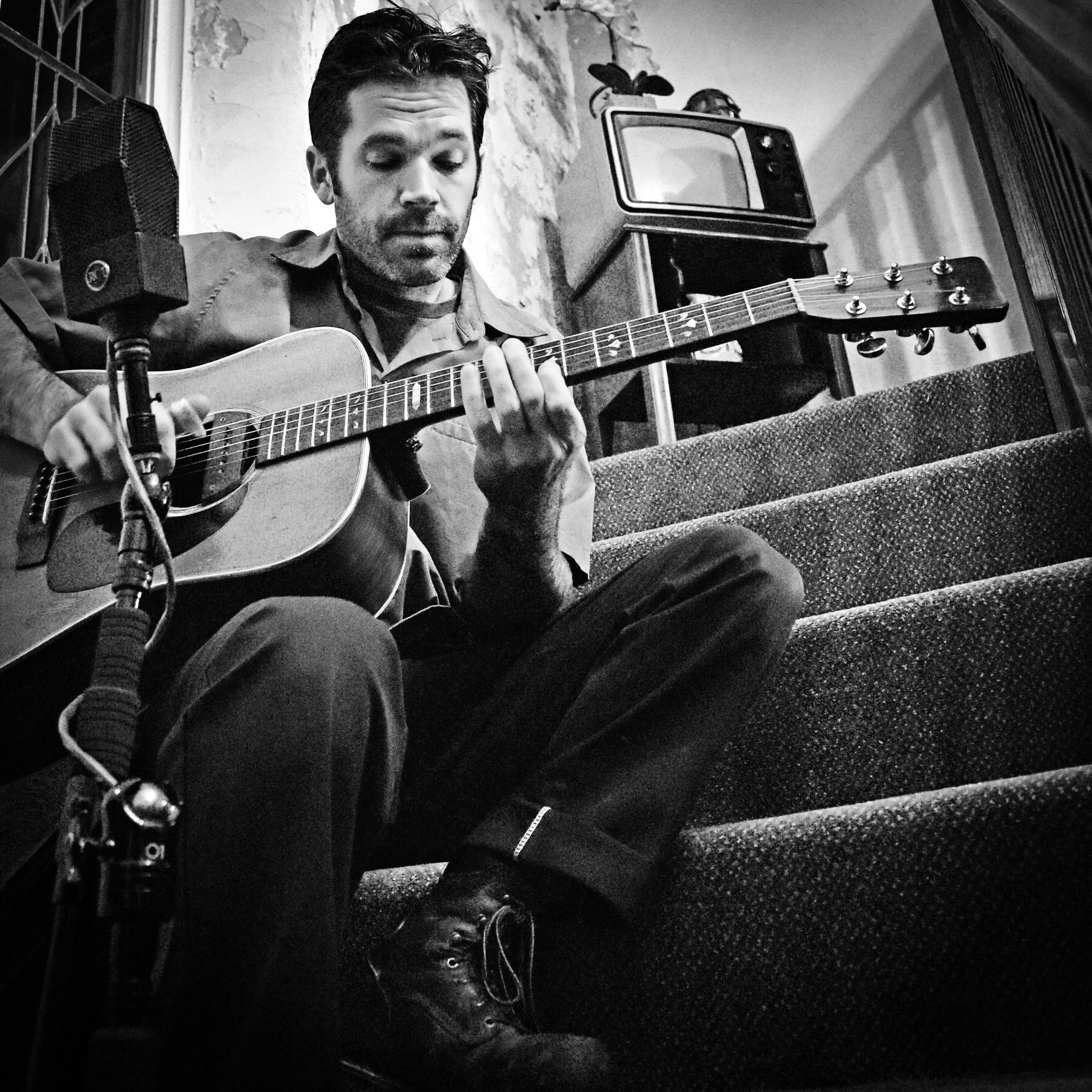 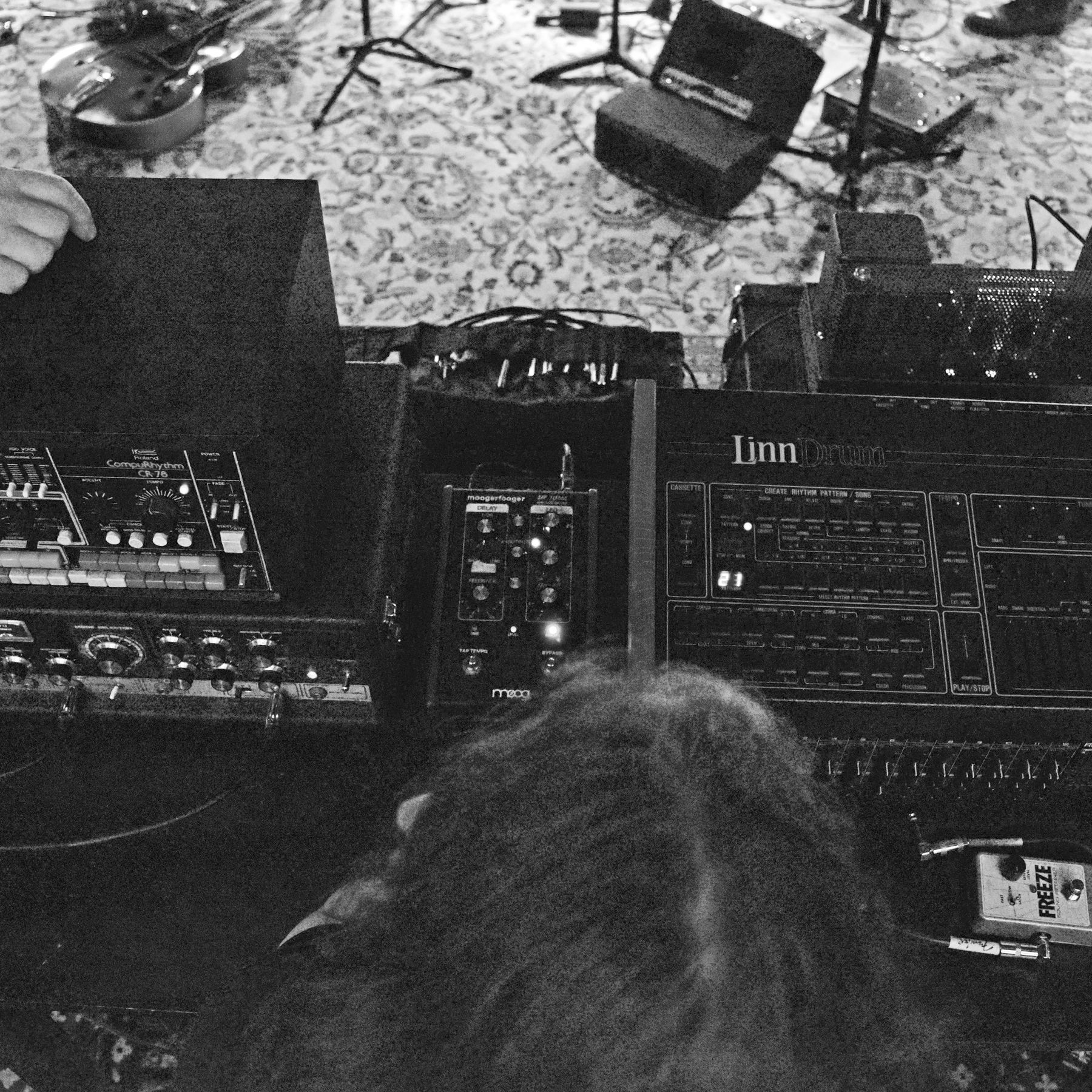 We worked on a few songs the following day and concluded the entire session with a song I wrote years ago called "When Zero Seems Too High".  It's a song, to be completely honest, that I never really loved completely. But we had some time left and John has always joked with me about it. He has said it's one of the best songs I have ever written and Jeff agreed.  So I figured, "what the hell lets give it a shot." We walked into the control room after the final take and Pam, who had been running the tape machine for the session and taking all the photographs you see here, was standing by the board with tears in her eyes.  The song had hit her and after seeing that it totally changed my view of that song.

Music is such a powerful vehicle. I hope you like The Beverly Tapes VOL I - it's definitely a snapshot that captured a wonderful moment of time in my life.