Starting a band is often met by challenges. I grew up playing sports and for the most part I found it to be a very black and white world - very little time is spent in the grey.  There were rules that everyone followed, clear objectives, defined boundaries, time limits and obvious ways to measure success.  In music and art in general I've found there to be none of that, its all grey.  This whole journey of mine, writing songs for the past 15 years, has felt like an exploration into the in between.  I have been a very fortunate artist and always seem to find myself surrounded by incredible musicians - much more talented than me. One of the things that I did carry over from my past life as an athlete is my experience in how to build good teams.  The best players on paper aren't always the right fit for the team.  It's ALL about chemistry, work ethic and the shared vision - especially when you're making art. 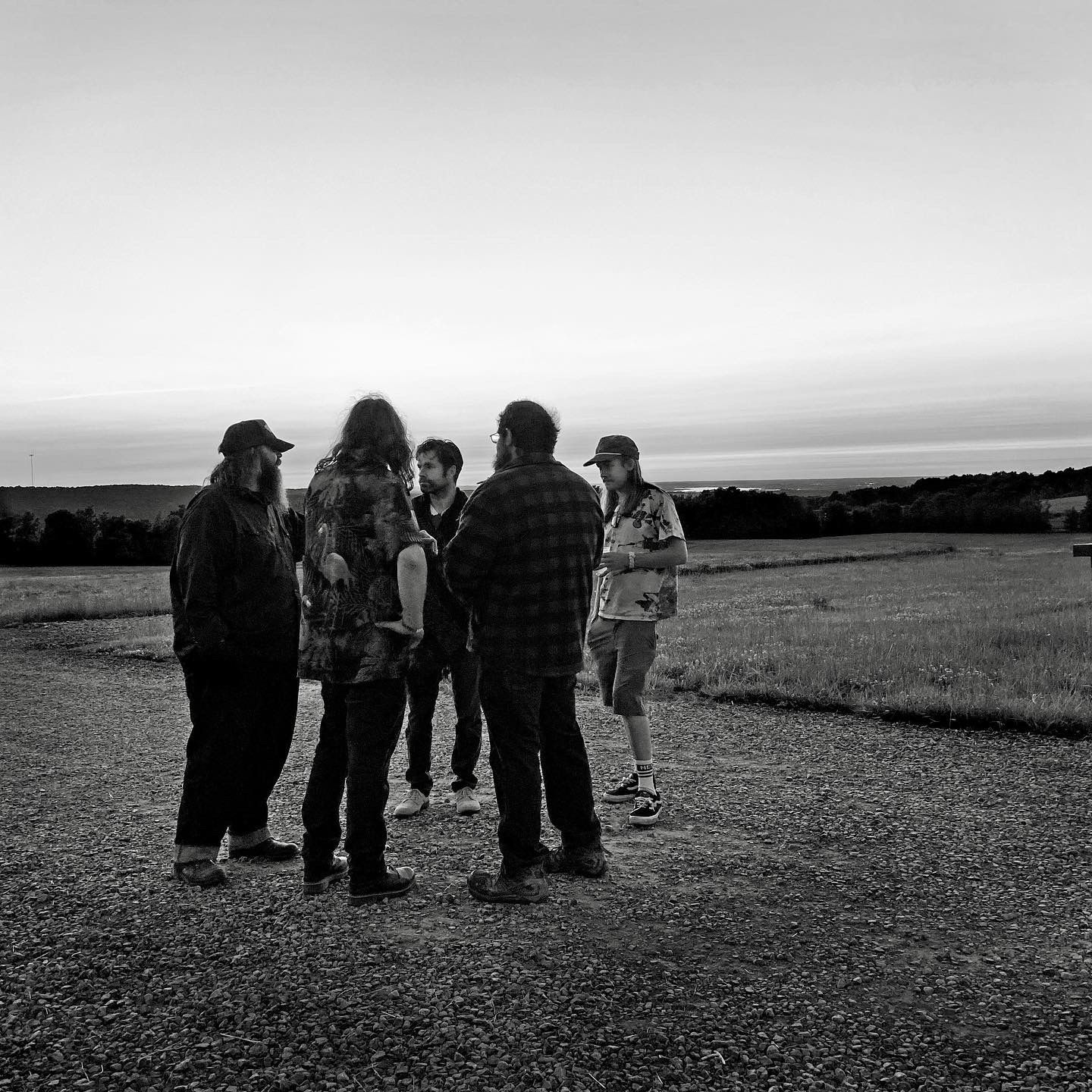 The Echosound came together organically out of a moment in time when a musical future was uncertain and cloudy. It was 2020, the world was locked down. I went from playing music all the time and returned back to listening to music all the time. I dusted off my old vinyl collection and went through it tirelessly - I had plenty of time on my hands. I fell back in love with the music that shaped me and the albums that have withstood the test of time. It was a wonderful experience that forced me to hit the reset button on a lot of things in my life including my musical direction.  It didn't take long before I got the itch to start playing and writing again.  I called John and told him that I wanted to get together once a week with a group and just jam on some ideas that I had.  He asked what kind of players I was looking for and all I said was, "great people that just want to have fun." 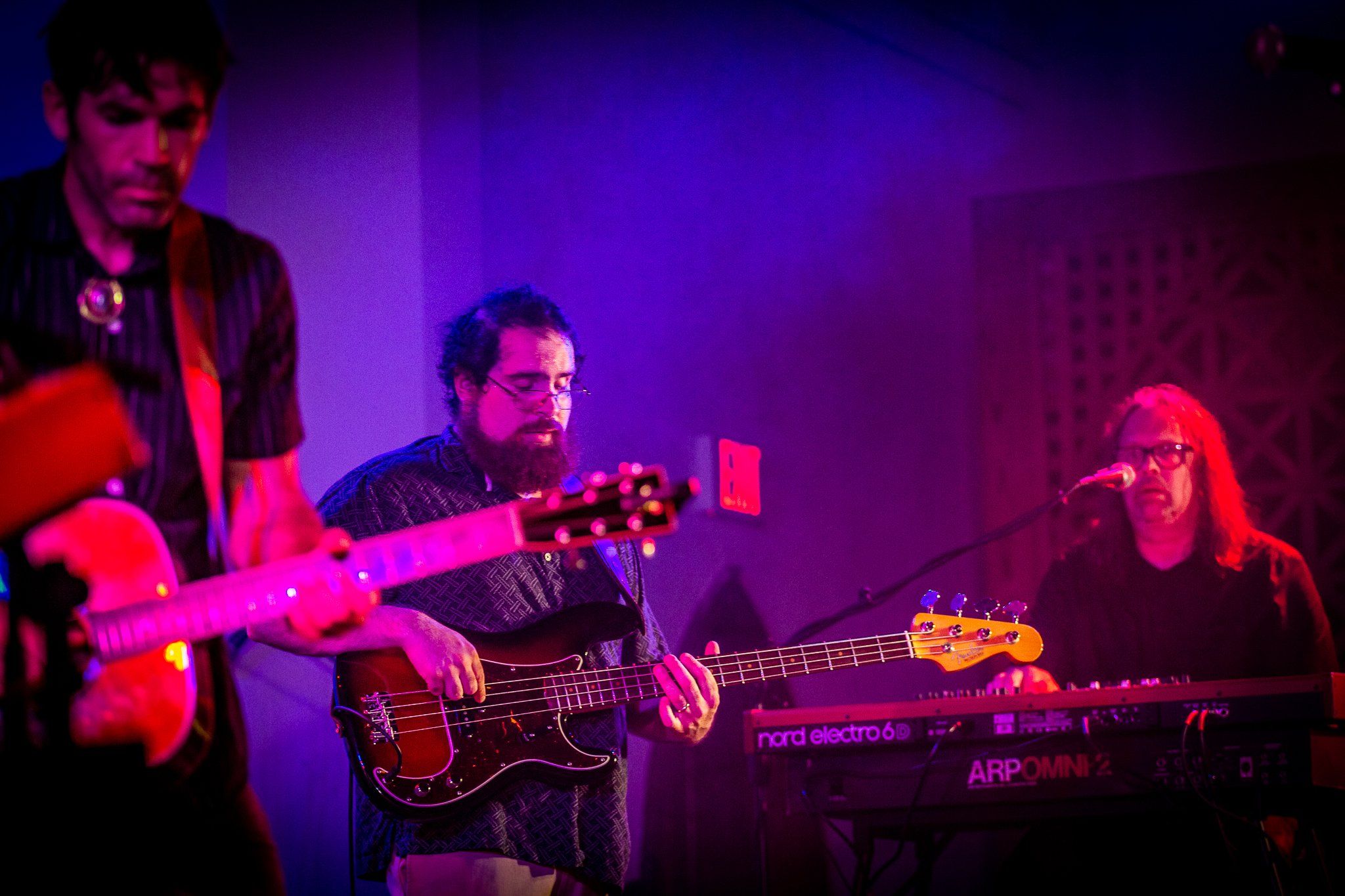 Our first call was to a bass player we had heard great things about through our circles, enter Zak Masoud. I'd seen him play a time or two with Bad Mama's Blues Band and I could tell that he had the feel that would work really well with John's guitar playing.  His approach to music is very organic with a playfulness to his sound that just makes you groove along.  Needless to say that after the first time jamming with Zak and getting to talk with him about his feelings in regards music it was clear he was THE guy.   Music means the world to Zak Masoud - it's in many ways his lifeblood. So, we had a bass player. One down, two to go. 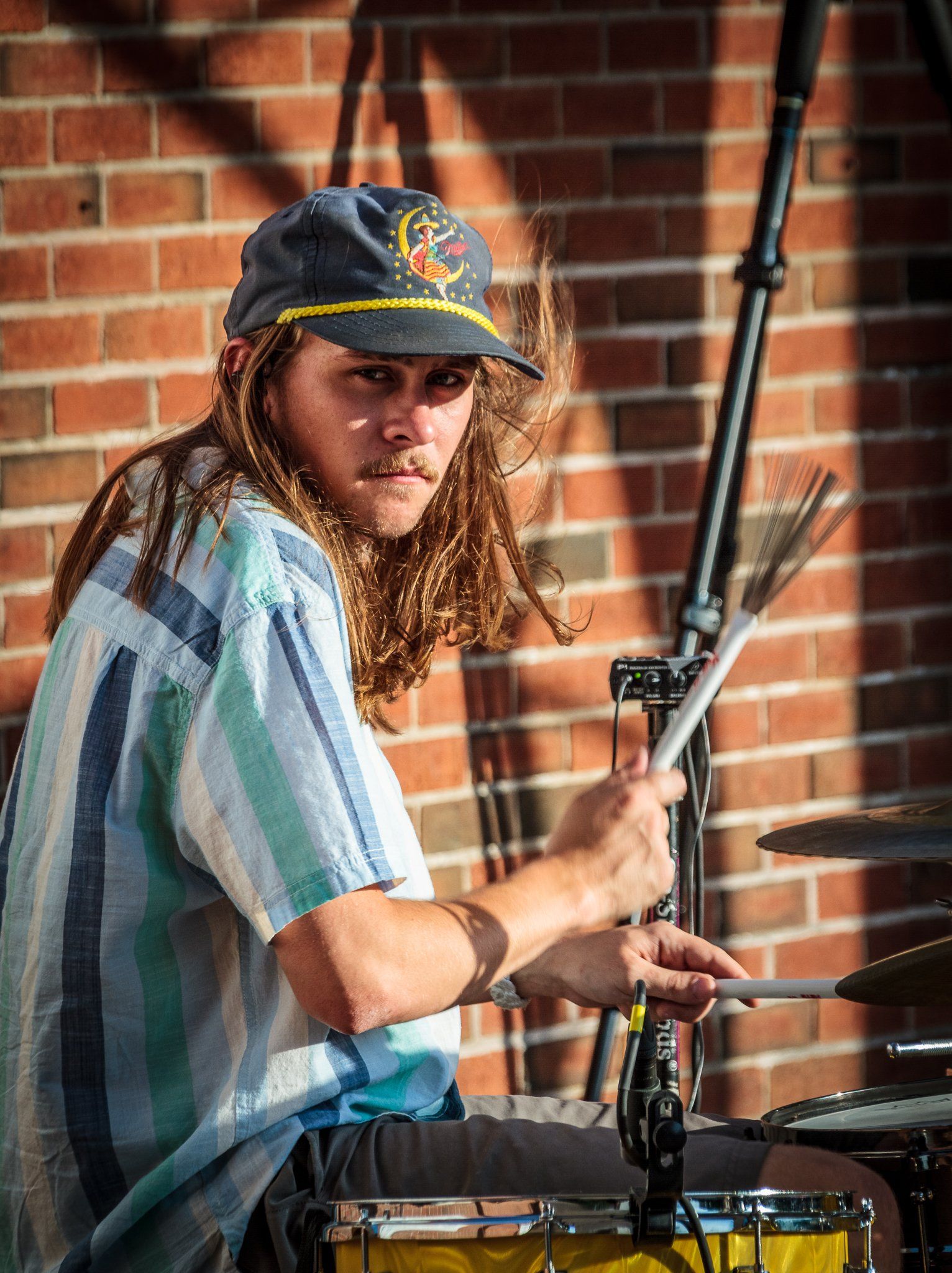 In the following weeks the three of us jammed with some drummers and keys players, all of whom were extremely talented.  On the way home from one of these sessions John said out of the blue, "do you remember that cool guy we met out at that festival who had the green drum set? He was really fun to talk to and that drum set was killer. I wonder if he is any good?" Neither of us remembered his name because it was literally a 3 minute conversation during a load out at a festival. But thanks to some phone calls and the internet we were able to track down the name of this mysterious drummer - enter Adam Manion aka Chaz Minivan. That night John sent me a link to some videos he found of Adam playing with his band Trampoline Jetstream.  It was obvious that he was incredibly skilled technically but he also had a feel for dynamics that you don't find very often.  So we set up a jam and we got to see his ability to play a wide range of musical styles and drive jams in a very unique and intricate fashion.  But most importantly, his personality meshed perfectly with what we had going on and what we wanted to do.  Adam was driven and we were over the moon that he wanted to play with us. Two down, one to go. 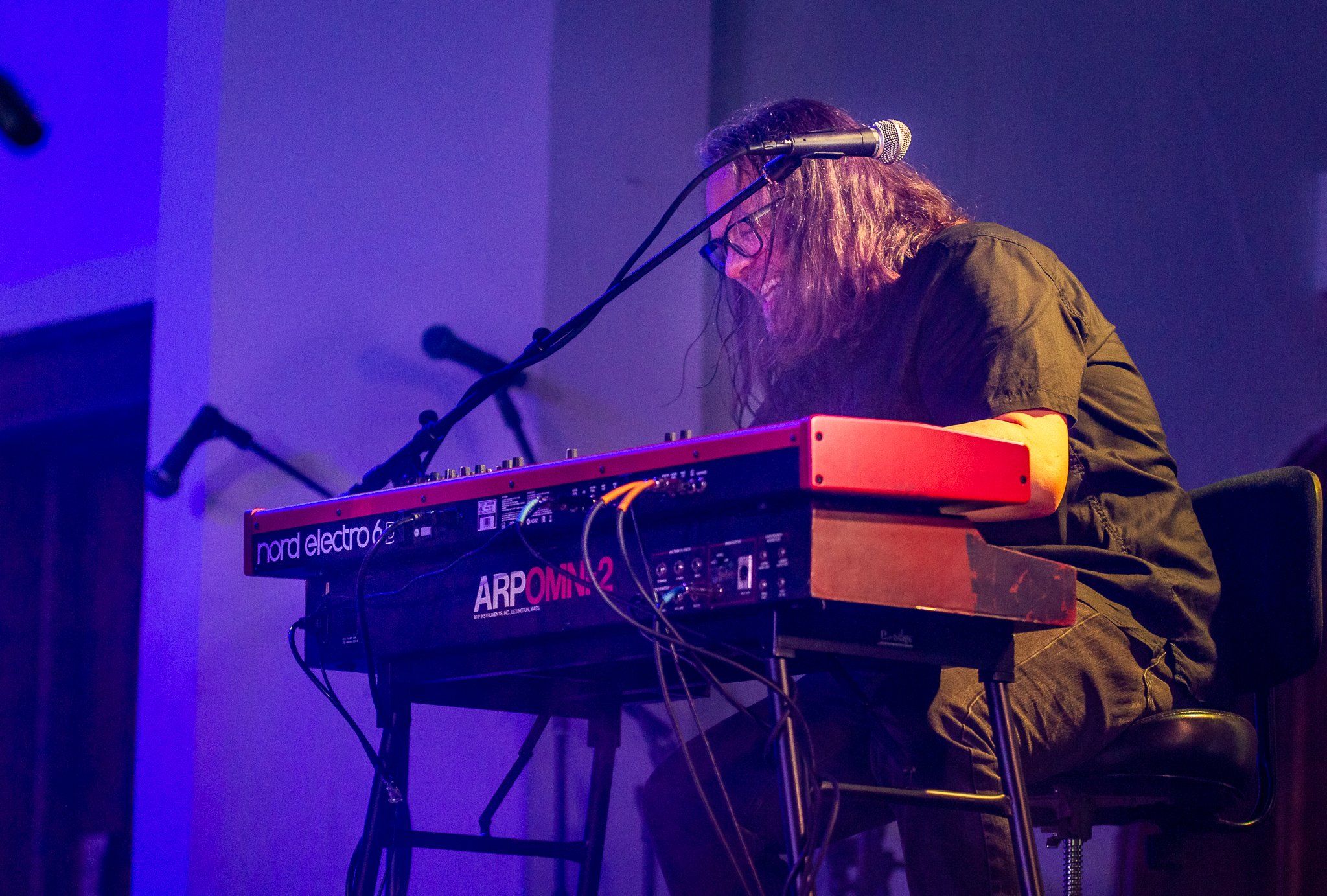 We played the following few weeks as a four piece and managed to work up some original material - we had a few songs. We flirted with the idea of just being a four piece but we all knew that something was missing - we all wanted keys, we knew what it would bring to the sound. But we had exhausted our options or so we thought. After a session at the very end of the night over a beer or two we were talking about finding a keyboard player and Adam brought up some of the work he had done with Jeff Aderman at Big Blue North with his band.  "You know Jeff?!", John and I both said simultaneously.  Jeff Aderman is someone that John and I knew really well because he was in our first band, The Villains. After that band Jeff ended up rolling into the production side of the creative world and got out from behind his keyboard and sat down in front of a Neve console for the next ten years. Jeff was one of the most technical players that we ever played with, he came from prog land.  He is a swiss army knife of talent with skills in theory, production, songwriting, performance, etc..., but he hadn't played a live gig in ten years so we didn't even think of him because we figured he was just out of the game. So kind of as a joke I sent Jeff a message asking if he felt like dusting off his old synths to come play with some friends - although we knew if would be incredible and he would fit the puzzle perfectly we were 100% expecting a hard "not interested".  But instead he said, "let me think about it."  The following day he sent - "okay I'm in."  There it was! Jeff came up and boom we were a band, off and running.

We played all of 2021 as a band that went under the name WADE which I wrote new material for and included very little of my normal tunes.  I approached WADE like a jam band. I wanted to step away from the microphone and explore becoming a better instrumentalist so it was more instrumental and less lyrical than the stuff I had done in the past. Although it was fun and going great I started to bring in some of my more "songwritery" tunes into our rehearsals and I got to see the true power of these four musicians - their ability to be dynamic, listen hard and service the songs.  After a few of these rehearsals I called for a band meeting and we all got together.  In short I told them that my heart is in writing songs with lyrics and stories that really mean something to me.  I asked how they felt about all of it and we all agreed that its all about the songs and arrangements.  So we all shifted gears creatively and I started writing songs that I was comfortable with, story songs, to which the band would arrange and add their flavor to.  This spawned a totally new chapter in our story and for the very first time I felt comfortable bringing in all of the songs I was writing because these guys were shaping them in such a beautiful way. 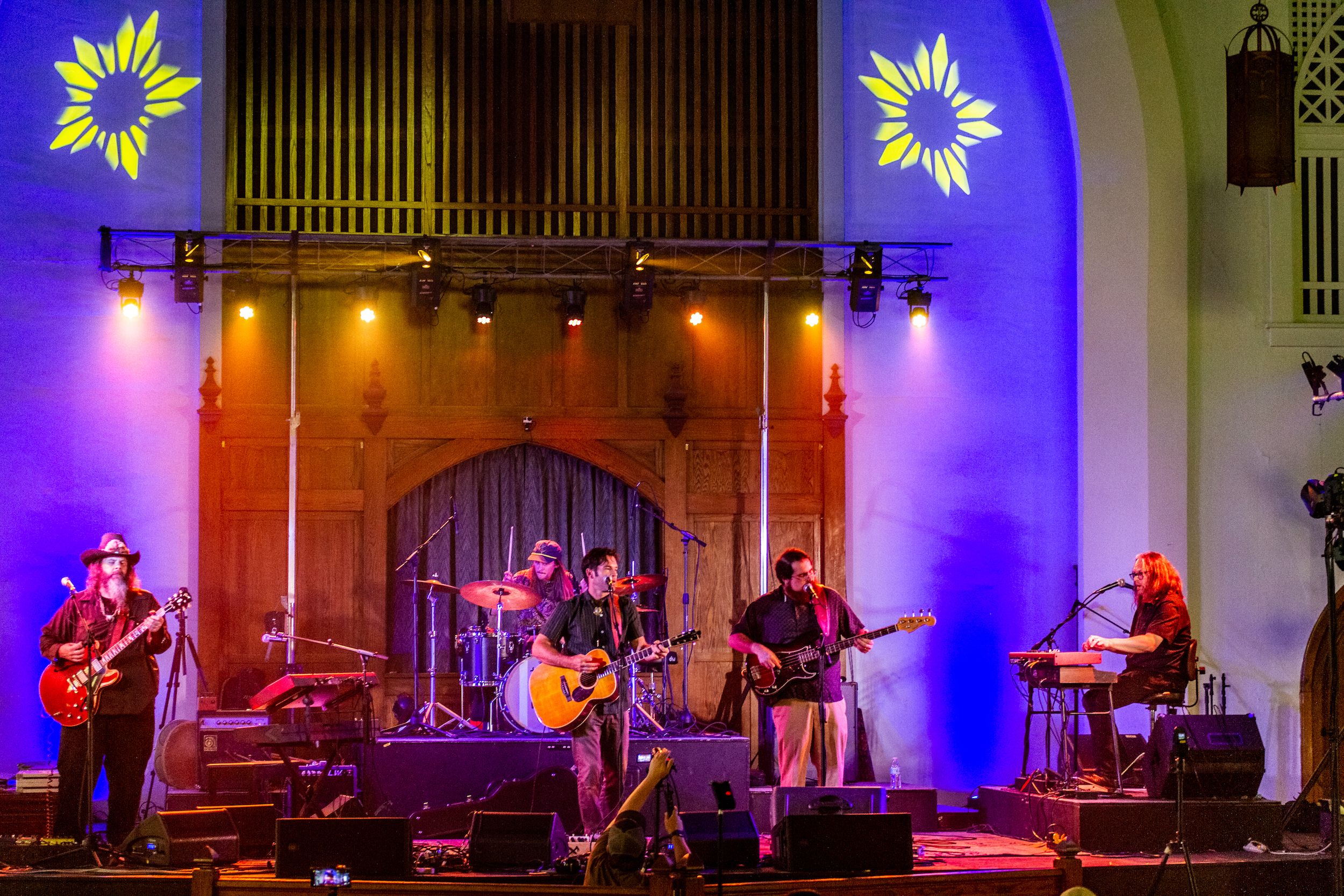 Zak, John, Adam & Jeff are all songwriters themselves so that is why it was working.  They weren't just listening to the groove, finding the key and thinking of a part.  They were listening to the lyrics and getting the entire picture before they created their parts - they were buying into the story.  This is that shared vision that I spoke of earlier.  We continued getting together and playing regularly and each of us was growing closer socially and musically.  Soon we were playing again only this time a much different set of songs, ones that I was more comfortable presenting.  All of a sudden we were off and running with a steady schedule, then only problem was our name.  WADE didn't feel right to me anymore and I was having a hard time having two separate projects going between my solo stuff and the band.  I explained that I wanted to bring everything under one roof so we can be more focused and try to grow in a more streamlined fashion.  It took us quite a while but we finally landed on "Mike Powell & The Echosound".

We head into the studio today to make our very first full band album under this new name and I couldn't be happier or more creatively fulfilled than I am at this moment.  The music part is great but its the friendships with these guys that I value the most. I can't wait to bottle up this moment in time.  Thank you to everyone that has come out this summer to see us - we can't thank you enough. We will be keeping you posted on the new recording progress over the next couple weeks on our social accounts. All the best to all of you.